I said that today I would post pictures of my parents new house. That's not gonna happen.

Let me start at the beginning. I had plans to leave super early to go to my parents new house in Delaware. Well, the rugrats slept so I decided to as well. Hey, its the weekend! I finally managed to get out of the house after 9AM with the Wild One hysterical at the door. She broke my heart. I made an ATM and gas stop near the highway and called Mom to tell her I was on my way and relayed the drama I left behind. Rather than tell me that the Wild One would be fine once I was gone, she told me to GO BACK FOR HER. And, I DID. Mr. T thought I was insane, but the Wild One was thrilled to be going out with Mommy. We finally left at 10AM. Once I got to Delaware, Mr T told me that after I'd left, the Happy One dissolved into tears seeing not only her Mom but her sister leave. That broke my heart all over again, but I was now 2 hours away and too far to go back for her. Mr. T was smart to keep that from me till I was too far to return home again! So, I admit. I, the one who judged people that can't leave their kids just because they cry, coudn't leave my kids because they cried.

ANYWAY, I thought my parents would handle a move the way I always have. I pack in an organized fashion, direct the movers to put things in some sort of order to minimize the amount of moving I will have to do and I'm usually pretty settled in within a couple of days.

Not the case with the 'rents.

Chaos and disorder pretty much describe the scene. Stuff everywhere. Looking for something? Good luck. For example, we all had to shower minus a shower curtain because we couldn't find the rod to hang the curtain! Unpacking was crazy. Neither of my parents want to get rid of anything so there are appliances from the 70s, thousands of glasses and nowhere to put any of this stuff. My brother, the electronics expert focused on connecting the TV and computer systems and he was leaving to go party in NYC later that night (after driving back from Delaware!). Helping my bro also dominated Pop's time which left me and mom to do the rest of the house. Needless to say, very little got done but I did what I could while I was there. The living room was mostly set up as was the kitchen when I left this AM and I'd managed to hang blinds in the living room. SO, this disarray wasn't something I wanted to capture in pictures. I did, however, take a picture of the outside even though it was starting to rain. There is no driveway as of yet because of some problem with the asphalt people but it will be there at some point.

Their cottage isn't old or white. Its new construction with modern conveniences and a modern layout but the style is cottagey and I think its adorable. My parents were looking for a place to retire and as much as they love beautiful old things, it wasn't what they needed at this point in their lives. So, here it is! (Hi Wild One! She had a great time.) If you click on the first picture, you can see more detail such as the stone porch. 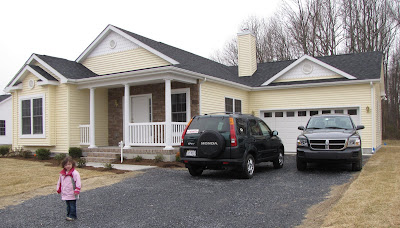 I love this little scallop detail. 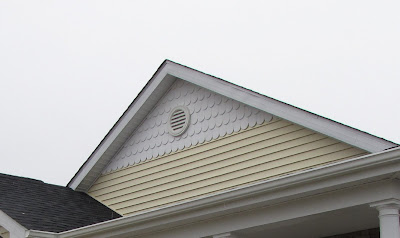 I'm sure in the coming weeks, I'll be heading over again, so pictures of the inside will come eventually.
Posted by Unknown at 6:46 PM 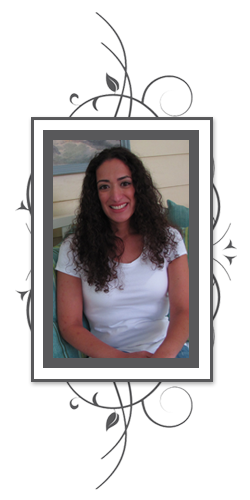